You may have noticed that my latest sample now has a proper UI instead of the homegrown sliders and keyboard toggles that I was using in my older samples. What you might not have noticed is that there’s a whole bunch of behind-the-scenes changes to go with that new UI! Before I ramble on, here’s a quick bullet-point list of the new features:

It occurred to me a little while ago that I could try to develop my framework into something that enables rapid prototyping, instead of just being some random bits of cobbled-together code. I’m not sure if anybody else will use it for anything, but so far it’s working out pretty well for me.

A little while ago I switched to working in VS 2012 with the Windows 8 SDK for my samples, but continued using the VS 2010 project format and toolset in case anybody was stuck on 2010 and wanted to compile my code. For this latest sample I decided that legacy support wasn’t worth it, and made the full switch the newer compiler. I haven’t done any really crazy C++ 11 things yet, but now that I’ve started using enum class and nullptr I never want to go back. Ever since learning C# I’ve always wanted C++ enums to use a similar syntax, and C++11 finally fulfilled my wish. I suspect that I’ll feel the same way when I start using non-static data member initializers (once I switch to VS 2013, of course).

When I found out about AntTweakBar and how easy it is to integrate, I felt a little silly for ever trying to write my own ghetto UI widgets. If you haven’t seen it before, it basically shows up as a window containing a list of tweakable app settings, which is exactly what I need in my sample apps. It also has a neat alternative to sliders where you sort of rotate a virtual lever, and the speed increases depending on how far away you move the mouse from the center point. Here’s what it looks like integrated into my shadows sample: 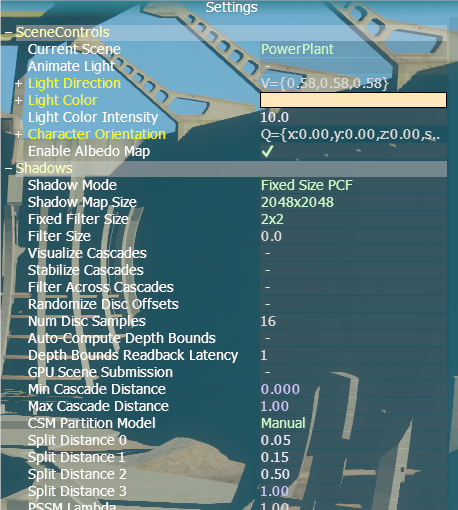 If you’re thinking of using AntTweakBar in your code, you might want to grab the files TwHelper.h/cpp from my sample framework. They provide a bunch of wrapper functions over TwSetParam that add type safety, which makes the library a lot easier to work with. I also have much more comprehensive set of Settings classes that further wrap those functions, but those are a lot more tightly coupled to the rest of the framework.

This one is a no-brainer, and I’m not sure why I waited so long to do it. I decided not to implement it using the Win32 file-watching API. We’ve used that at work, and it quickly became the most hated part of our codebase. Instead I took the simple and painless route of checking the timestamp of a single file every N frames, which works great as long as you don’t have thousands of files to go through (usually I only have a dozen or so).

For a long time I’ve been unhappy with my old way of defining application settings, and setting up the UI for them. Previously I did everything in C++ code by declaring a global variable for each setting. This was nice because I got type safety and VisualAssist auto-complete whenever I wanted to access a setting, but it was also a bit cumbersome because I always had to touch code in multiple places whenever I wanted to add a new setting. This was especially annoying when I wanted to access a setting in a shader, since I had manually handle adding it to a constant buffer and setting the value before binding it to a shader. After trying and failing multiple times to come up with something better using just C++, I thought it might be fun to  try something a bit less…conventional. Ultimately I drew inspiration from game studios that define their data in a non-C++ language and then use that to auto-generate C++ code for use at runtime. If you can do it this way you get the best of both worlds: you define data in a simple language that can express it elegantly, and then you still get all of your nice type-safety and other C++ benefits. You can even add runtime reflection support by generating code that fills out data structures containing the info that you need to reflect on a type. It sounded crazy to do it for a sample framework, but I thought it would be fun to get out of my comfort zone a bit and try something new.

Ultimately I ended up using C# as my data-definition language. It not only has the required feature set, but I also used to be somewhat proficient in it several years ago. In particular I really like the Attribute functionality in C#,  and thought it would be perfect for defining metadata to go along with a setting. Here’s an example of how I ended up using them for the “Bias” setting from my Shadows sample:

For enum settings, I just declare an enum in C# and use that new type when defining the setting. I also used an attribute to specify a custom string to associate with each enum value:

To finish it up, I added simple C# proxies for the Color, Orientation, and Direction setting types supported by the UI system.

Here’s how it all it ties together: I define all of the settings in a file called AppSettings.cs, which includes classes for splitting the settings into groups. This file is added to my Visual Studio C++ project, and set to use custom build step that runs before the C++ compilation step. This build step passes the file to SettingsCompiler.exe, which is a command-line C# app created by a C# project in the same solution. This app basically takes the C# settings file, and invokes the C# compiler (don’t you love languages that can compile themselves?) so that it can be compiled as an in-memory assembly. That assembly is then reflected to determine the settings that are declared in the file, and also to extract the various metadata from the attributes. Since the custom attribute classes need to be referenced by both the SettingsCompiler exe as well as the settings code being compiled, I had to put all of them in a separate DLL project called SettingsCompilerAttributes. Once all of the appropriate data is gathered, the C# project then generates and outputs AppSettings.h and AppSettings.cpp. These files contain global definitions of the various settings using the appropriate C++ UI types, and also contains code for initializing and registering those settings with the UI system. These files are added to the C++ project, so that they can be compiled and linked just like any other C++ code. On top of that, the settings compiler also spits out an HLSL file that declares a constant buffer containing all of the relevent settings (a setting can opt-out of the constant buffer if it wants by using an attribute). The C++ files then have code generated for creating a matching constant buffer resource, filling it out with the setting values once a frame, and binding it to all shader stages at the appropriate slot. This means that all a shader needs to do is #include the file, and it can use the setting. Here’s a diagram that shows the basic setup for the whole thing:

This actually works out really nicely in Visual Studio: you just hit F7 and everything builds in the right order. The settings compiler will gather errors from the C# compiler and output them to stdout, which means that if you have a syntax error it gets reported to the VS output window just as if you were compiling it normally through a C# project. MSBuild will even track the timestamp on AppSettings.cs, and won’t run the settings compiler unless it’s newer than the timestamp on AppSettings.h, AppSettings.cpp or AppSettings.hlsl. Sure it’s a really complicated and over-engineered way of handling my problem, but it works and I had fun doing it.

I think that the next thing that I’ll improve will be model loading. It’s pretty limiting working with .sdkmesh, and I’d like to be able to work with a wider variety of test scenes. Perhaps I’ll integrate Assimp, or use it to make a simple converter to a custom format. I’d also like to flesh out my SH math and shader code a bit, and add some more useful functionality.